We offer 5% discount for cash, Revolut, Remitly and Aircash payments!
Shipping from Croatia across EU (no customs fees)! 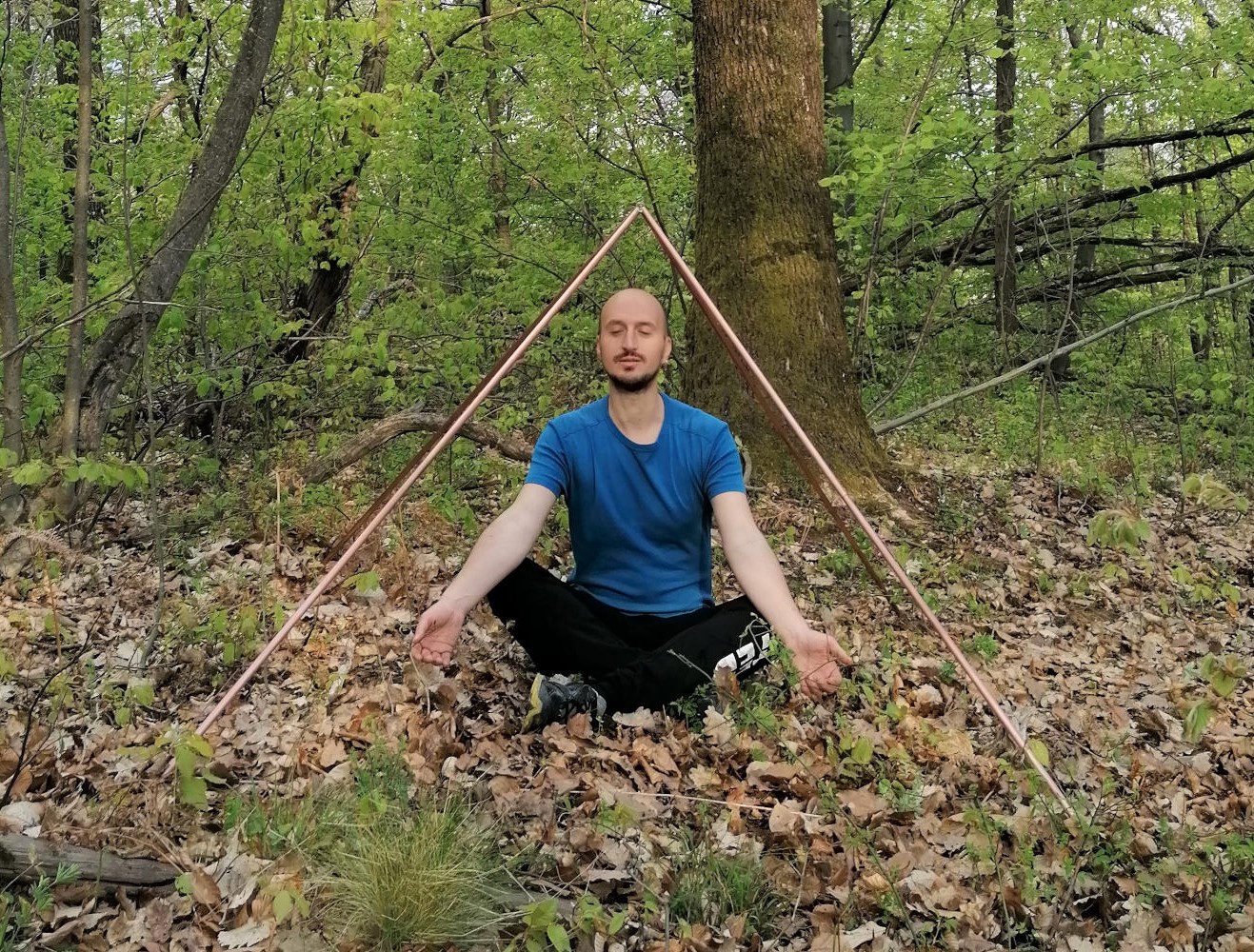 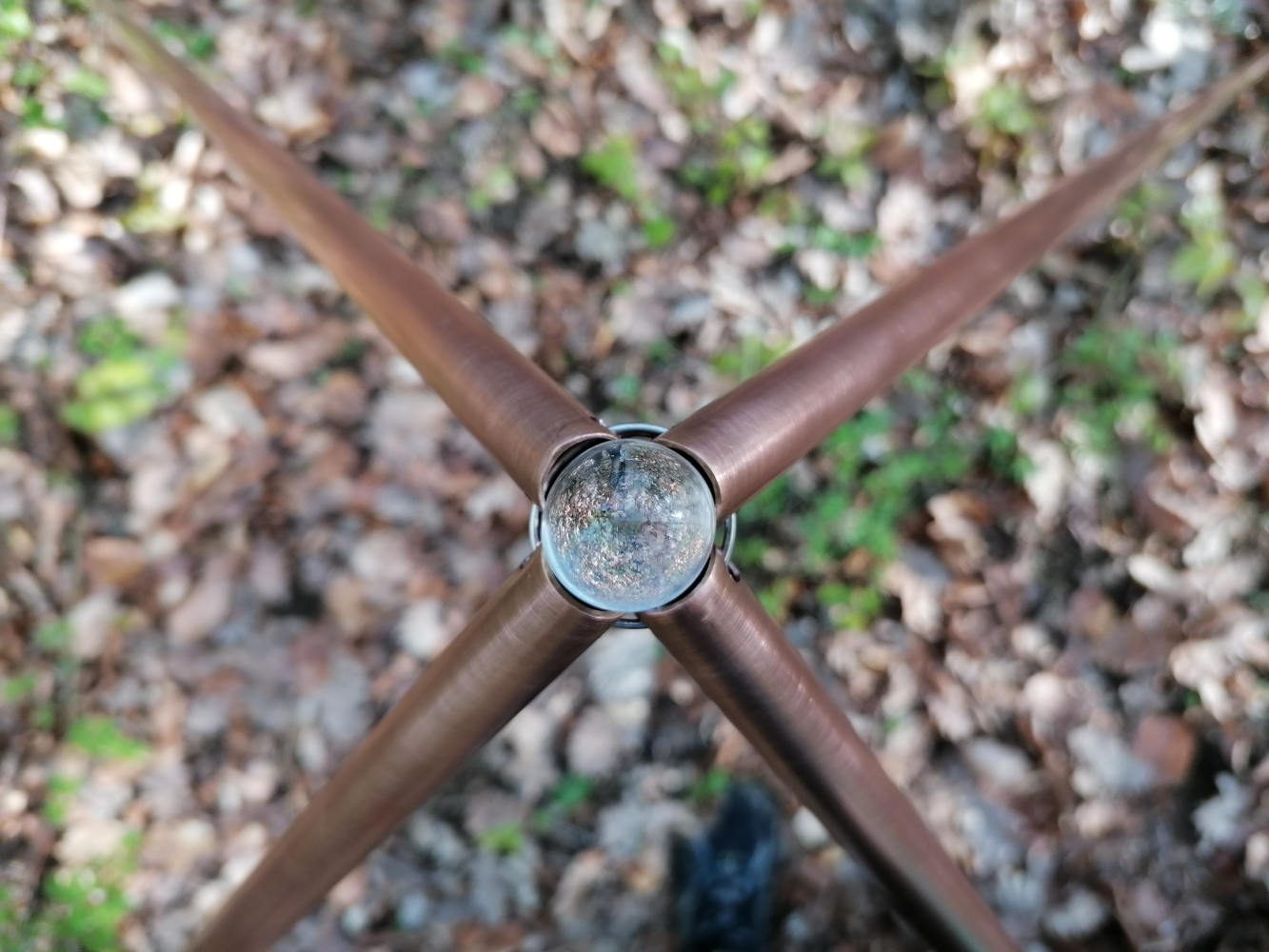 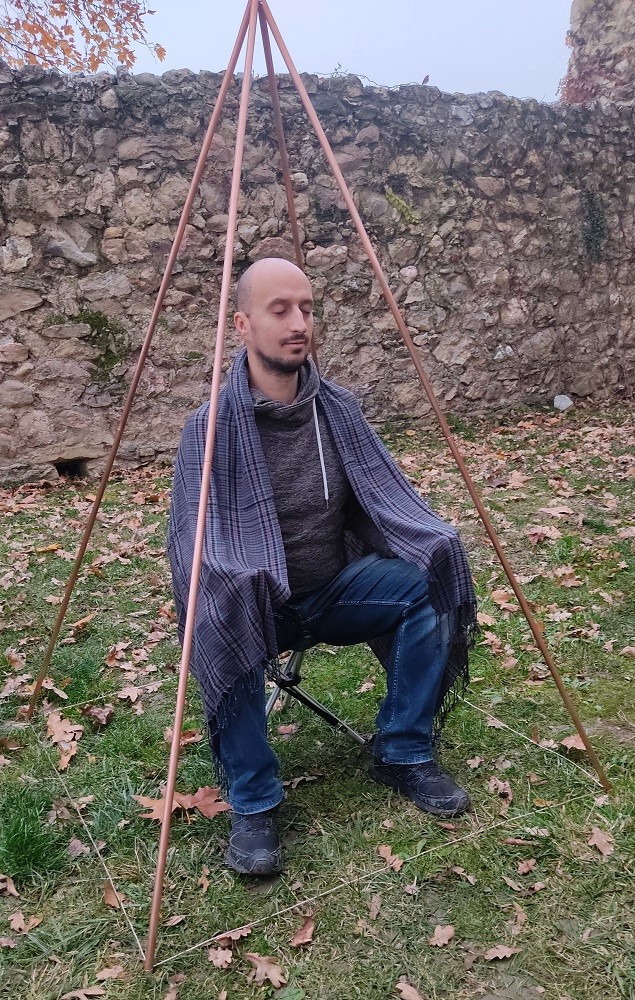 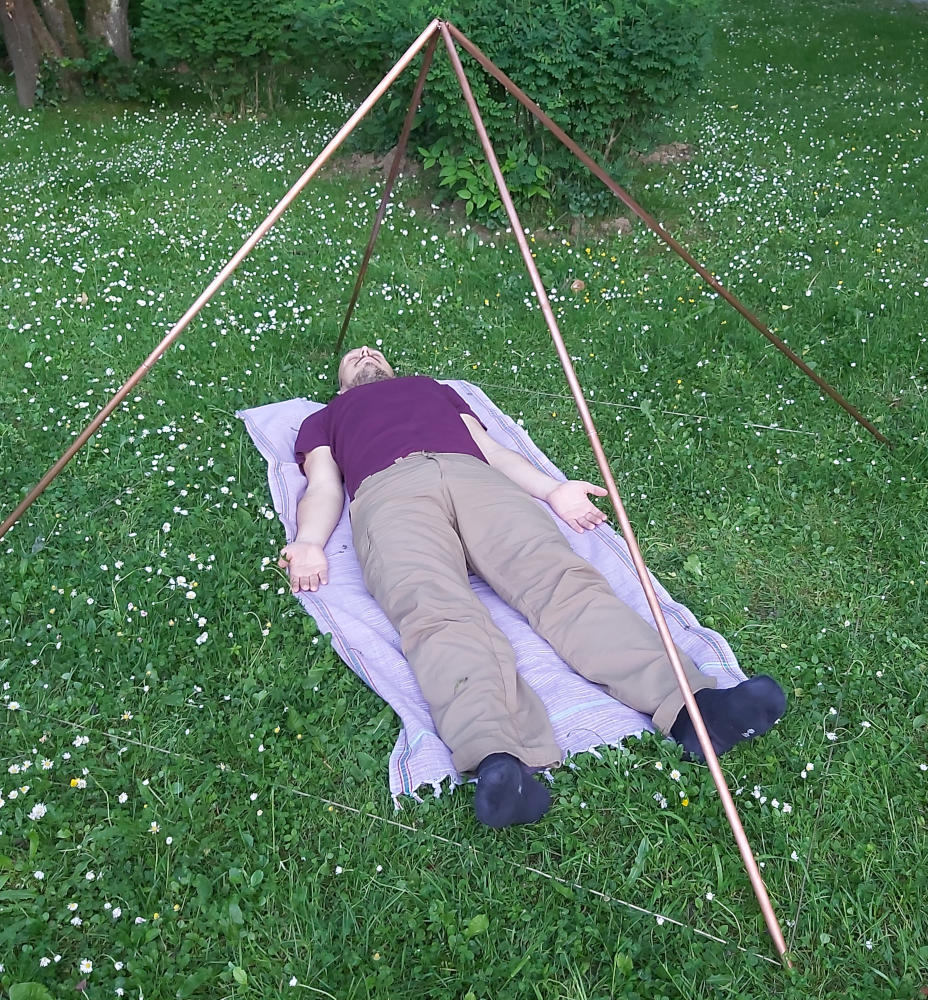 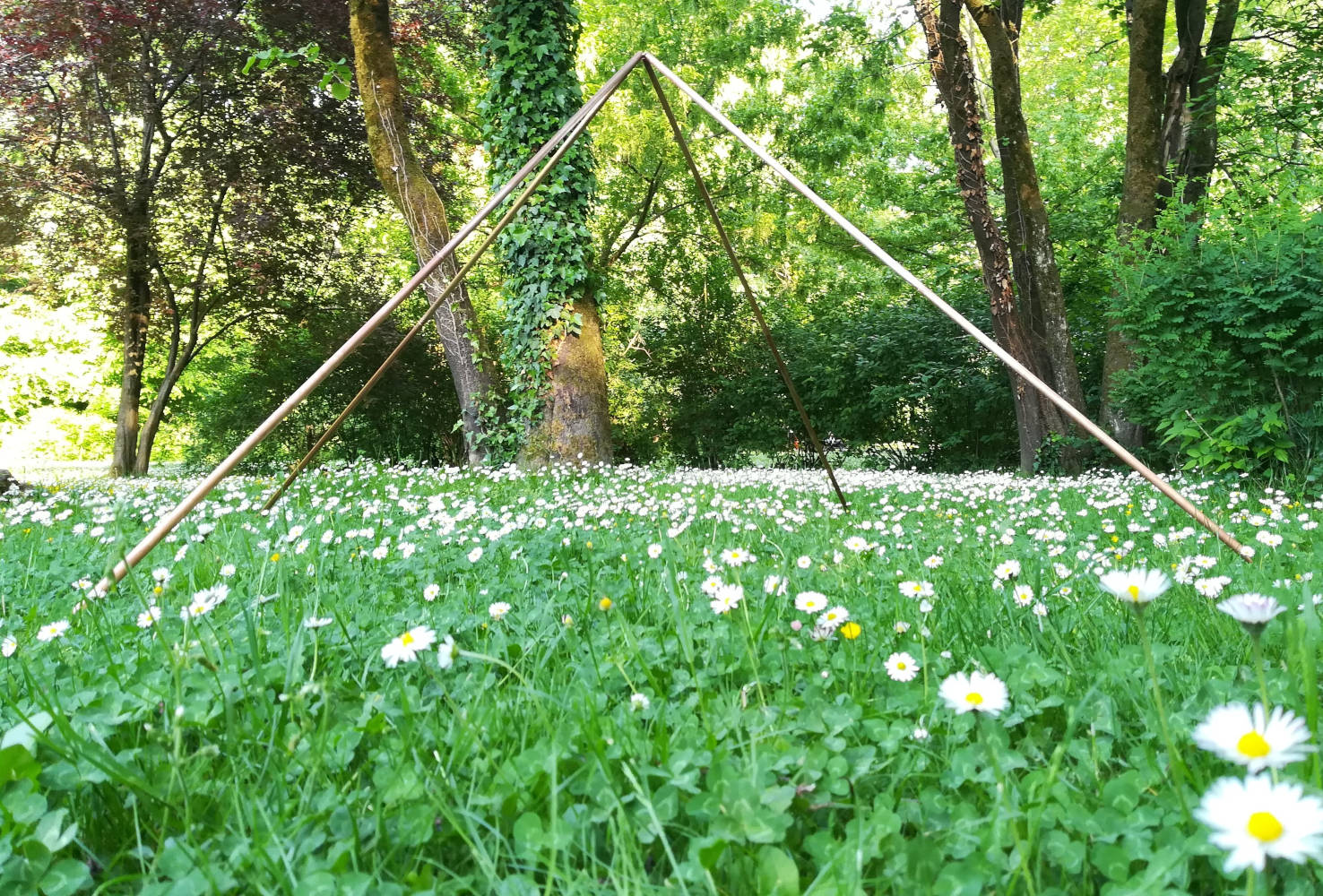 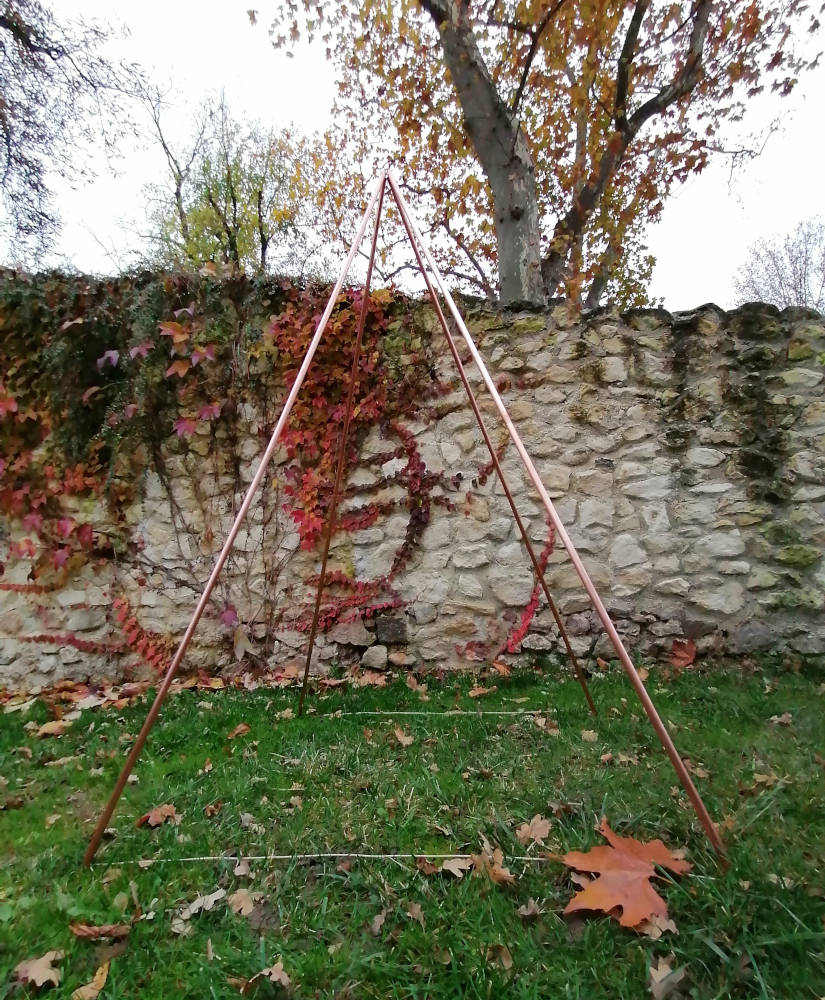 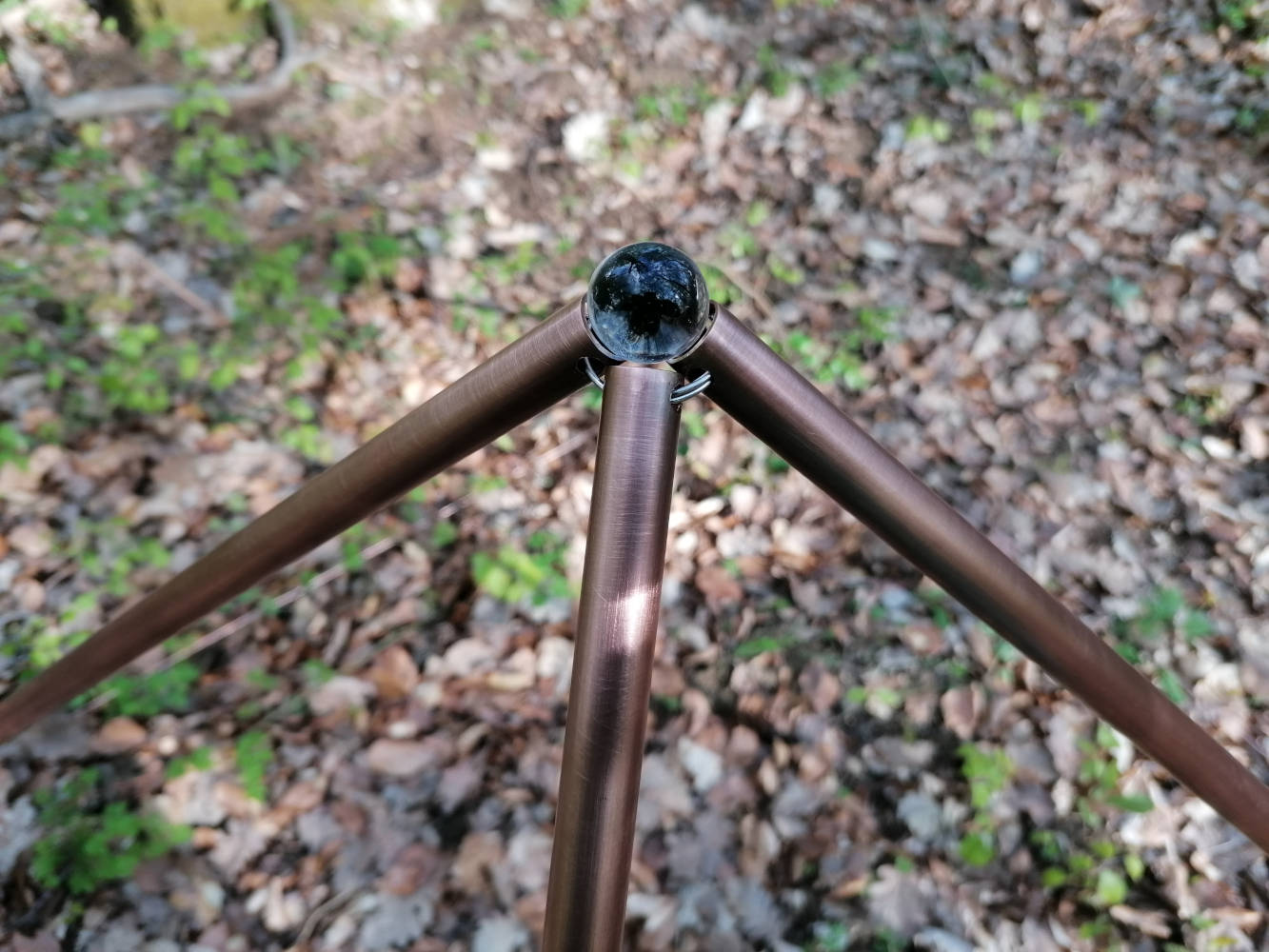 For what reason is the shape of the pyramid so accepted in the world for meditation, relaxation, healing, etc.? In short, because the Great Pyramid in Giza (Egypt), the Nubian Pyramids (Sudan) and the pyramids in some other parts of the world were built on the principle of sacred geometry – the golden cut (golden number).

Golden ratio Φ (phi, fi) is a mathematical constant, present not only in the spoken pyramids but also – in nature, architecture, painting, music, graphics, and the creation in which it is located gives natural, harmonious, balanced and aesthetically “ideal” composition. Golden ratio is compositional law in which minor part refers to major like larger part to the total, and that always in equal ratio of 1 : 1.618.

“The golden ratio is a reminder of the relatedness of the created world to the perfection of its source and of its potential future evolution.”
– Robert Lawlor

How does a pyramid frame created by the golden ratio function and why is it used for decades during all types of meditations, for relaxation, healing, massage, sleep, etc.?

The shape of pyramid frame itself increases the benefits of meditation, it acts like an antenna for more efficient collection of cosmic energy. The top of the pyramid attracts, collects Cosmos energy and directs it into our energy field. The result is a very relaxed state with numerous physical and metal benefits. Our body relaxes and mind becomes clear.

When we meditate in pyramid, relaxed state without thoughts occurs faster and it is easier to enter a state od meditation – meditative state. Pyramids are excellent conductors of energy and are able to transmit information. When the object is located inside of a pyramid, it gets intensified information about itself. This frequency raises the potential of the elements and “charges” them.

Meditation pyramid can help unblock the pineal gland, otherwise known as the third eye (Ajna, sixth chakra). In meditation, it is that point which is related to connecting with energy of the Cosmos. If it is blocked, we will harder find inner peace and serenity that meditation offers.

Pyramids act like a sound fork to our bodies and mind, balancing our energy centers, chakras. Sacred geometry (golden ratio according to which pyramids are built) has the same giving effect to everything in it – human face and fingers, body of animals, in DNA molecule, in the spiral shape of our galaxy, etc.

Tesla Tower (Wardenclyffe Tower) is known for his start of build in 1892. in order to generate negative ions and rain in drought areas. Pyramids create negative ions, which is among other, researched by scientist and inventor Gary Fosburg in 21th century, and they have a positive effect on the body by helping to reproduce and repair body cells. In addition, it is considered that they have balancing effect on electromagnetic field of the body. This effect is greatly improved if copper is used for building pyramids. Too much positive ions (the result of air pollution) can cause depression and other illnesses.

There is a lot of magnetic concentration in the pyramids, which helps in protecting human body from the harmful effects of negative vibrations, harmful radiation and radio frequencies. With regular use, pyramid can help us in creating beneficial environment for our body’s normal functioning.

Meditation pyramids can help the brain to reach theta frequency while we meditate. Theta is a state of mind where we can instantly change reality. It is also beneficial for instant healing. It is a very powerful mental state, state of deep meditation, deep relaxation and mental clarity. It relieves stress and reduces anxiety in people prone to it, and brings perfect harmony.

Cosmic energy in the pyramid passes through multiple reflections and expand through its interior. It is the way on which the pyramid can concentrate cosmic energy. By staying in it, every cell in the body is filled with cosmic energy (prana or chi) much more and faster than staying outside of it. By increasing level of prana (chi) in the body, human naturally comes to contentment, peace, joy and enthusiasm.

– Russian explorers kept larger amounts of salt and pepper in the pyramid, and after used it in the diet for about five thousand people in various selected prisons in Russia. Surprisingly, within a few months, there was a dramatic improvement in their behavior, and majority of criminal behavior almost completely disappeared, while prisons that used “regular” salt and pepper showed no signs of behavior change.

– Kirlian’s photos show that the aura is significantly brighter after only a 15-minute stay in the pyramid.

– Dr. Carl Benedicks, a Swedish scientist, discovered that pyramid within itself produces a certain resonance or frequency. Two German scientists, Born and Lertes, came to the same conclusion.

– Bill Kerell, a researcher who has been experimenting with pyramids for about 17 years, in his book states that a doctor from one Canadian hospital told him they used the pyramid in their department for burns. Results were surprising, after a few minutes under pyramid, the patient’s pain began to decrease. They also discovered that the burned areas healed much faster.

– Prof. S. M. Kilmenko and dr. D. N. Nosik from the Institute of Virology Ivanovskii R&D within the Russian Academy of Medical Sciences, conducted a study involving the drug veinglobulin, natural compound that fights viruses in humans. They found out that when the drug was diluted to a concentration of 50 micrograms per milliliter and stored for some time in a pyramid, it became approximately three times more effective in fighting the virus.

MASTERS ABOUT THE PYRAMIDS

” The main reason for building pyramids is energy absorption. Their shape attracts strength. As you sit in the pyramid, you will experience new thoughts that may not be possible outside of it. Its very shape will give you a divine feeling, divine vibrations.

”It is true that meditation can be done at all places and at all times. However, if we do meditation while sitting in a pyramid, we will receive more universal energy, i.e. cosmic energy. The pyramid is like a magnifying lens. Sun rays are everywhere, but if these sun-rays are focused at a point by using a magnifying lens, even a paper kept at this point will burn.

The word “pyramid” can be split in two parts – these are ‘pyra’ and ‘mid’. ‘Pyra’ means fire and ‘Mid’ indicates a position in the centre or in the ‘middle’. When energy is focused, it gets stronger and its strength doubles or triples. If the strength is increased further, then fire emerges. So, to get the maximum energy from the pyramid, we have to sit in the middle of this fire i.e. pyra + mid!”

World famous inventor Nikola Tesla said: ”Everything is electricity”. So, the first reason why we use copper as a building material for meditation pyramids is that copper is fantastic conductor of electric energy. If Tesla is right about everything is electricity, then copper material also conducts universal energy very well. One more reason we use it, is that it comes from nature, it is dug out of the ground. Copper (Cu) is naturally-occurring mineral. We humans also have it in our bodies (it helps with many processes in our bodies)!

Copper pipes contain more than 99.9% of pure Copper. That’s why these pipes are the best choice of material for making meditation pyramids. It’s not surprising that it is being used for decades to construct pyramids.

1. Following the model of the Great (Cheops) Pyramid of Giza in Egypt.

– hand made according to sacred geometry (golden ratio)
– for sitting on the floor, lying, massage
– materials used: copper pipes (made of more than 99.9% of pure Copper), coated copper wire (for pyramid base), small iron ring, copper caps (to protect floors in your home)
– when assembled, it occupies approximately 175 x 175 cm of space on the ground (≈ 69 inch x 69 inch)
– slope: according to Giza pyramid slope angle 51.83° (approximately)
– quick assembly and disassembly: 30 – 60 seconds
– NO tools are required
– suitable for use both in the house and in nature
– can be used on uneven surfaces and slopes in nature
– lower slope angle and lower peak height than Nubian meditation pyramid has
– great for grounding
– great for healing
– often used for working with the lower four chakras: 1. Root Chakra (Muladhara), 2. Sacral Chakra (Swadhisthana), 3. Solar Plexus Chakra (Manipura), 4. Heart Chakra (Anahata)
– on top of our Giza meditation pyramid there is a ball-shaped rock crystal (clear quartz); rock crystal is universal stone and through our own practice we have discovered that it enhances the effect of the pyramid and supports healing work.

2. Following the model of the Nubian Pyramids (Pyramids of Meroë) in Sudan, Africa.

– hand made according to sacred geometry (golden ratio)
– for sitting on the floor, lying, massage
– materials used: copper pipes (made of more than 99.9% of pure Copper), coated copper wire (for pyramid base), small iron ring, copper caps (to protect floors in your home)
– when assembled, it occupies approximately 115 x 115 cm of space on the ground (≈ 45 inch x 45 inch)
– slope: according to Nubian pyramids in Sudan (Pyramids of Meroë) slope angle 72° (approximately)​.
– quick assembly and disassembly: 30 – 60 seconds
– NO tools are required
– suitable for use both in the house and in nature
– can be used on uneven surfaces and slopes in nature
– sharper slope angle and greater height of the top than the Giza meditation pyramid has
– great for grounding
– great for healing
– often used for working with the upper three chakras: 5. Throat Chakra (Vishuddha), 6. Third-Eye Chakra (Ajna), 7. Crown Chakra (Sahasrara).

You can easily order copper Giza or Nubian foldable pyramid for meditation:
– in our international webshop
or
– by sending us a message via the contact form below.

Ready to find your wonder?

“There are NO limits. There are plateus, but you must not stay there, you must go beyond them. A man must constantly exceed his level.”

This website uses cookies to improve your experience while you navigate through the website. Out of these, the cookies that are categorized as necessary are stored on your browser as they are essential for the working of basic functionalities of the website. We also use third-party cookies that help us analyze and understand how you use this website. These cookies will be stored in your browser only with your consent. You also have the option to opt-out of these cookies. But opting out of some of these cookies may affect your browsing experience.
Necessary Always Enabled
Necessary cookies are absolutely essential for the website to function properly. These cookies ensure basic functionalities and security features of the website, anonymously.
Functional
Functional cookies help to perform certain functionalities like sharing the content of the website on social media platforms, collect feedbacks, and other third-party features.
Performance
Performance cookies are used to understand and analyze the key performance indexes of the website which helps in delivering a better user experience for the visitors.
Analytics
Analytical cookies are used to understand how visitors interact with the website. These cookies help provide information on metrics the number of visitors, bounce rate, traffic source, etc.
Advertisement
Advertisement cookies are used to provide visitors with relevant ads and marketing campaigns. These cookies track visitors across websites and collect information to provide customized ads.
Others
Other uncategorized cookies are those that are being analyzed and have not been classified into a category as yet.
SAVE & ACCEPT